In 1952 F. Sherwood Taylor delivered the Christmas lectures at the Royal Institution on “How Science has Grown.” These became the basis for his book, An Illustrated History of Science. One reviewer praised Taylor for having “simply and concisely presented the panorama of science from the ancient Sumeria of some 7,000 years ago up to Einstein and modern nuclear physics.” Taylor drew on his considerable expertise—a chemist by training, he was the founding editor of Ambix, was curator at The Museum of the History of Science in Oxford, and ended his career as Director of the Science Museum in London.

The illustrations in Taylor’s book are at times taken from the historical record—photos of instruments or illustrations from early printed books—and at times the product of his and his illustrator’s imagination. He defended their work, saying:

Scientists and historians alike look askance at modern pictures of past events, feeling that the author and artist cannot fail to incorporate details for which no authority can be found. But if the reader accepts these pictures, not as authoritative sources, but as a synthesis of what has been transmitted by documents and what the author and artist know about the ways of life in days gone by, he will find in them the means of forming a visual idea of the men and events that brought science to its present position of pre-eminence. Yet in order that the student may not be tantalized, I have provided an appendix indicating some of the sources which we have used in devising these windows on the past.

Of the many iconic moments and issues Taylor selected to illustrate, he devoted four to Galileo. Interpreting a diagram from Dialogues Concerning Two New Sciences, we see Galileo trying to measure the force of a vacuum: 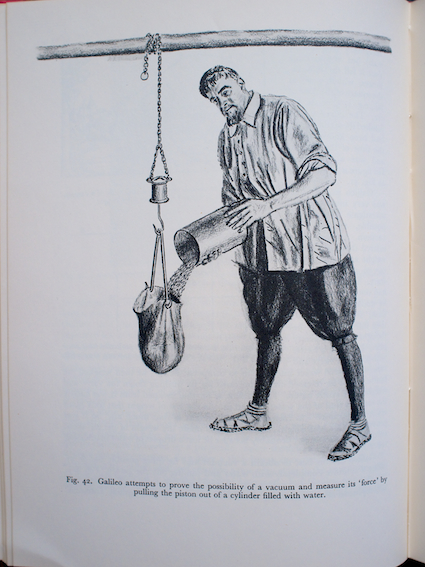 Another scene shows Galileo watching a lamp swinging from the ceiling of the cathedral in Pisa: 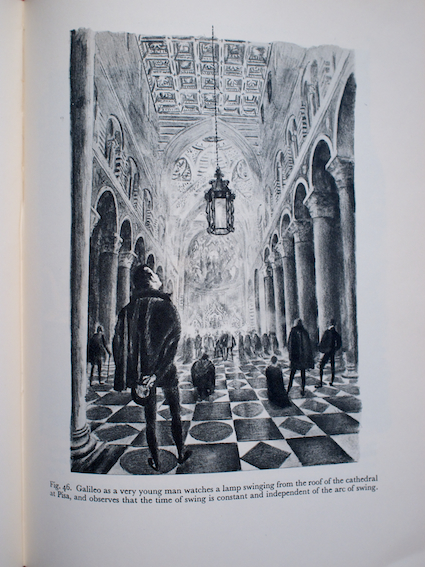 And Galileo reclines on a dock in Venice while he observes the skies through his telescope: 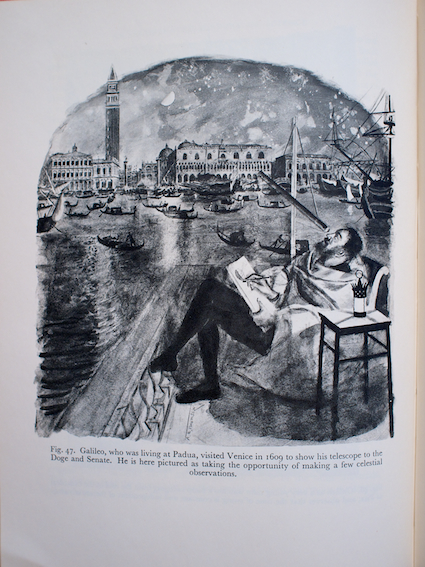 At other times we see Harvey preparing to dissect a body, or Aristotle examining an octopus, or Hook preparing a flea for inspection, or members of the Royal Society lounging in an opulent chamber, one of the petting a cat. The illustrations throughout the book offer fascinating glimpses into not the distant past, but into a 1950s that imagined the distant past.