In a fragment attributed to John Kamateros on the astrolabe are a handful of interesting diagrams illustrating the various parts of an astrolabe. Here is the diagram showing the rete.

There is also diagram illustrating the plate, and two showing different aspects of the back of the instrument.

Today’s image comes once again from the many diagrams in BL Royal MS 16 C XII. This particular drawing illustrates how the earth’s shadow is cast by the sun. I appreciate the detail the scribe added to the sun, giving it a face complete with attitude.

The standard geocentric model assumed that the planets were arranged out from the center, the earth, according to the period of revolution. On this assumption, the shorter the period, the closer the planet was to the stationary, central Earth.[1] Claudius Ptolemy ensconced the order in his Syntaxis (commonly know as his Almagest) sometime in the second century CE (out from the earth): moon, Mercury, Venus, sun, Mars, Jupiter, Saturn. Until at least the sixteenth century, this was the accepted order of the planets.[2] Any quick look through medieval astronomical or astrological manuscripts turns up diagrams illustrating this order of the planets. It became part of the university curriculum in Sacrobosco’s De sphaera.

As late as the seventeenth century printed copies of Sacrobosco’s De sphaera include a similar diagram.

So I was surprised to see a different order of planets in a sixteenth-century Greek manuscript. Here, among a collection of astronomical and astrological diagrams, is a diagram showing the earth at the center surrounded by the planets.

But in this diagram the order of the planets seems to be off. At the center we see the earth (γῆ), surrounded by spheres of the Moon (σελήν), Mercury (ἐρμῆς), Venus (ἀφροδίτη), Mars (ἄρης), the sun (perhaps?), Jupiter (ζεύς), and Saturn (κρόνος). Then, the signs of the zodiac encircle the entire diagram.

I have previously noticed this diagram and its unusual ordering. I suggested that there was nothing terribly interesting about it. Perhaps, I mused, what looks like Mars (the label “ἄρης”) in the sphere below the sun arose from the fact that the fifth sphere (typically the sphere for Mars) was colored in black. Consequently, the label had to be moved to the sphere below it (the fourth sphere, typically the sphere of the sun). I’m not sure that I am convinced. Sure it’s plausible, but plausible is only the most basic of explanatory requirements, a sort of useful but not binding sine qua non. Among other issues, that explanation still leaves the sun unlabeled. Moreover, I can imagine the reddish circle in the fourth sphere being that color to represent Mars, a reddish planet. Another possible explanation is simply that the scribe made a mistake. We often assume scribes were particularly inattentive or inept, introducing errors into the texts and diagrams they copied. But without any context, we are simply speculating. I have not found a source for this diagram, which might shed some light on the issue.

So at this point it’s just an interesting planetary diagram. I will certainly be keeping my eyes open for others.

I can’t reconstruct how I came across this page, but now that I have I can’t let it go without some comment. A search for the pair of terms “Brescia astrolabe” or “Byzantine astrolabe” gives as the second result a link to a Wikimedia page, Byzantine astrolabe at Brescia, 5th century AD (reconstruction).jpg

A quick point: this astrolabe is not a reconstruction of a “5th-century” astrolabe. The Byzantine astrolabe now in City Museum in Brescia is from the 11th century. It’s dated 1062, to be precise.

I wonder: the user who uploaded the image claims it was taken at The Technology Museum in Thessaloniki. Did the museum mislabel this display? Did the Wikimedia user misread/mislabel the file? I could not find a page for this astrolabe (I assume it is part of the Ancient Greek Technology) so I can’t determine if the museum is to blame here. The Wikimedia user claims to be a native Greek speaker, so misreading the label might surprise me. But who knows.

In any case, if want to know more about the Brescia astrolabe you should download David King’s thoughts on this astrolabe, Byzantine Astrolabe of 1062. Or read O.M. Dalton’s old but still very reliable essay, The Byzantine Astrolabe at Brescia (1926). Regrettably, there are no high-resolution images of it on the internet, so you’ll just have to travel to Brescia to see it. In the mean time, here is (a copy) of the image from Dalton’s essay.

Working through a manuscript I came across this folio with a large diagram of the zodiac in the center.

What caught my attention was the drawing in the upper right corner. The scribe seems to have thrown his arms up in confusion (?), exasperation (?), or simply resignation. Either that, or he’s being held up at spearpoint. I don’t know what prompted the scribe to draw this figure, but I am amusing myself thinking through different scenarios. 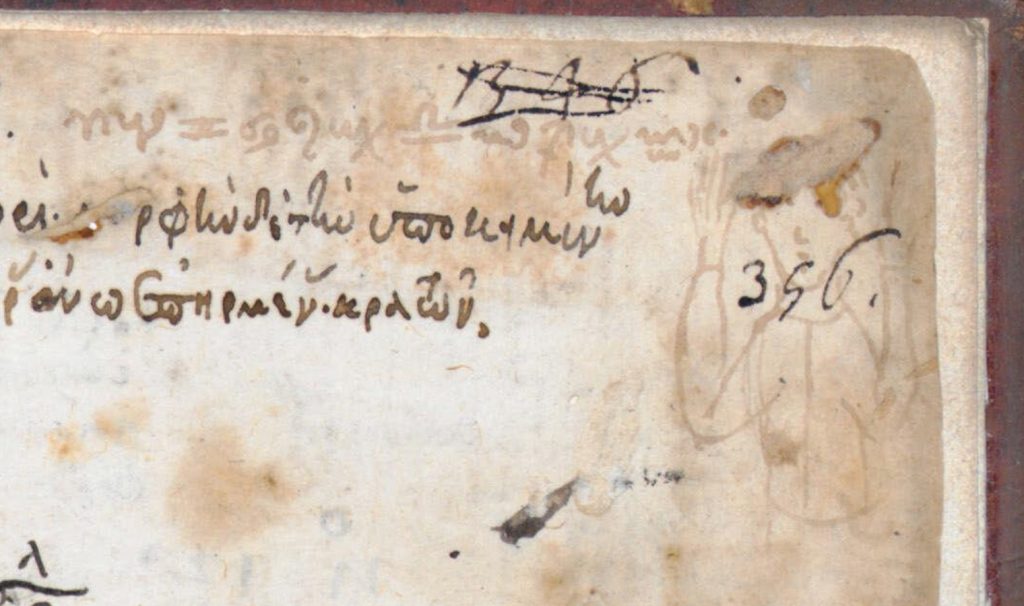 I sympathize with his plight (ok, not the being held up at spearpoint bit).