“I would wager that if an average citizen from Athens of 1000BC** were to appear suddenly among us, he or she would be among the brightest and most intellectually alive of our colleagues and companions, with a good memory, a broad range of ideas and a clear-sighted view of important issues,” Professor Crabtree says in a provocative paper published in the journal Trends in Genetics.

Dr. Crabtree thinks (should we say, “wagers” or “guesses”) “that we, as a species, are surprisingly intellectually fragile and perhaps reached a peak 2000–6000 years ago.” Why? Because there are a “large number of genes required for intellectual and emotional function, and the unique susceptibility of these genes to loss of heterozygosity.” Over the last 2-6 millennia we humans have been “slowly losing emotional and intellectual traits.”

While the popular press often distorts articles from scientific journals, in this case The Independent seems to have captured fairly accurately Dr. Crabtree’s point. 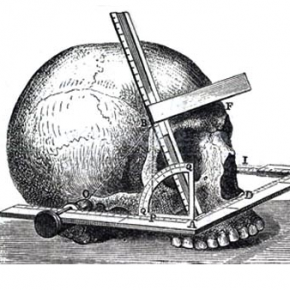 In addition to the hurdles these musings present in the way of testable hypotheses—Dr. Steve Jones from UCL noted “I have no idea how the idea [Dr. Crabtree’s] could be tested”—the general claims are deeply problematic. As has been shown most eloquently by Stephen Gould in The Mismeasure of Man, correlations between cranial volume or brain size and intelligence reveal more about person doing the measurement than the person being measured. Dr. Crabtree’s claims are fundamentally untestable, failing even the simplest of Popperian-falsification requirements to be a science. How would you test the intelligence or emotional function of historical peoples?

And when did it become acceptable for an author to admit ignorance about a discipline or field, make no effort to gain any knowledge, and yet claim to use that field to draw conclusions. Dr. Crabtree:

… I argued that we are slowly losing emotional and intellectual traits; but how did we get them in the first place? This is one of the most important questions of modern anthropology and the subject of much investigation and debate. Although not my area of expertise, I offer the following thoughts on the topic.

Surely if an author is wading into a “subject of much investigation and debate” the author has an obligation to acquire at least some expertise in that subject.

**For what it’s worth, citizens in 1000BC Athens were enjoying the nadir of the Greek Dark Ages. It’s easy to imagine the Athenian agora teeming with perhaps as many as dozen goat herders vying to become this week’s alpha male.

UPDATE: Tim Whitmarsh has pointed out that “Athens had no citizens at all in 1000 BCE.”↩

2 replies on “Dawn of the Living Genetic-Materialist Determinism”

[…] not alone in denying relevant expertise. In November Gerald Crabtree, a geneticist at Standford, admitted his lack of expertise in a field and then went on to speculate about “one of the most important questions” in […]