According to this article, historians of science have demonstrated that science is a process of cultural acquisition:

A well-documented example of cumulative cultural evolution is seen in the growth of scientific knowledge. Historians of science have detailed how scientific knowledge has gradually accumulated over successive generations of scientists, with each new generation building on the advances of previous generations. To paraphrase Isaac Newton, each new generation of scientists can only see further by “standing on the shoulders of giants”. Mathematics, to which Newton himself contributed, is an illustrative example of how scientific knowledge slowly accumulates over successive generations and thousands of years. Only after Babylonian scholars invented numerical notation and basic arithmetic in around 2000 BC could Greek and Arab scholars subsequently develop geometry and algebra respectively, which then allowed Newton, Liebniz and other Europeans to invent calculus and mechanics in the 17th century, through to present-day mathematics.

The author relies heavily on Derek de Solla Price’s Little Science, Big Science (New York, 1963) for this and subsequent claims about the “exponential increase in scientific knowledge over time.”

For the author, mathematics is the paradigm for cumulative scientific knowledge and for the acquisition of that knowledge. A cultural version of Haekel’s phylogeny recapitulates ontogeny undergirds the article:

Here is Figure 2A, with its wonderfully convincing linear fit: 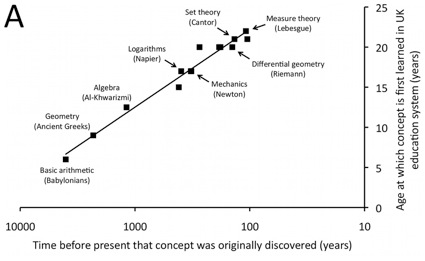 A few difficulties spring to mind:

Oh well, the numbers, equations, and graphs in the article more than compensate for any empirical or conceptual worries I might have.

One reply on “Science as Cumulative Cultural Evolution”

Kuhn’s theory, of course, is almost the polar opposite of this old-fashioned cumulative view, with his incommensurable paradigms (or disciplinary matrices, as he later called them).

I had the impression that the “incommensurable” part of Kuhn’s outlook no longer finds much favor among science historians. Or is that just me?